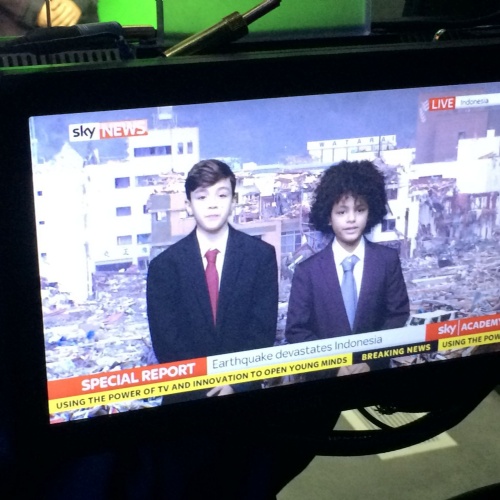 Here they were offered a behind-the-scenes tour of Sky followed by a hands-on learning experience in which they were encouraged to create their own TV content. The workshop also gave the students the chance to work with Sky’s team of experts and hands-on, cutting-edge technology, including cameras, editing software and sound recording.

The young reporters wrote their own scripts, after gathering factual information based around the topic of earthquakes before adopting the various roles of a news reporting team. Students donned costumes to play the parts of presenters, experts or members of the public being interviewed while their fellow team members took the roles of producers or camera operators. At the end of the trip they were able to enjoy a screening of their video.

Said Amandha: “... it was really cool because not only did we make and film our own news report using proper equipment but we also got to see the actual Sky Sports programme  being made in their studio...”

See the video clips below for the results of the students' hard work.