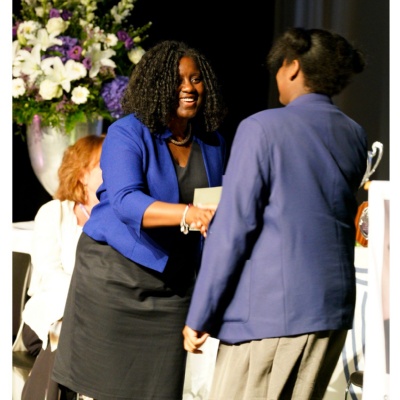 This year’s SJBC Prize Giving Evening was yet another success as students were rewarded for their hard work, dedication and contribution to the life of the school.

Headteacher Mr Dunne’s welcome address was followed by Guest of Honour Marsha de Cordova, MP for Battersea, who spoke eloquently and enthusiastically about the exciting prospects ahead for the hard working young students - the world being their oyster if they can accept the challenges ahead and apply themselves as much as they had to their studies and exams.

A second musical interlude featured Kain O’D and Surchana G, both Year 11 students, on drums and piano / vocals respectively. The duo performed two songs to an attentive and appreciate audience.

Awards were given to students from Year 7 through to Year 10 and those in Year 12 for ‘Best Overall Attainment’ and for ‘Most Improved’ in each subject studied. There were further Special Academic Achievement awards for Year 11 students who achieved the highest overall results in GCSE in the Summer 2018 exams in addition to the top 10 who made the most progress in their subjects.

Students who collected the most points throughout the year in the popular Green Card system (where signatures are collected for good work or recognition of citizenship) were also rewarded with certificates.

The inaugural ‘Mick Ayres Trophy for All Round Achievement in Sport and Academia’ was presented by Mick’s widow, Mary, in memory of the ex-Salesian pupil and teacher who spent much of his career at the school.

The evening rounded off with presentation of academic shields and trophies for those students who showed particular skills, dedication, determination and social responsibility during the year. Sporting, academic and exceptional achievement recognition was rewarded alongside those who showed endeavour in their work and attitude as well as contribution to the life of the school, overcoming hardship or being outstanding role models.

Salesian Foundation Governor Nick Potter remarked on the event: “ … one could only feel immense pride at the way our school was represented with such dignity and obvious pleasure from our audience. There is nothing better than being able to celebrate the success of our students and makes the work of us all who contribute to the life of the school in large and small ways so worthwhile …”